Just love these Loudhailer Acoustic Nights. Fabulous audience and atmosphere, and a real variety of quality songwriting. But first things first, my oh my what a fine spread of home made cakes! OK here goes; Joan’s amazing Devils Food Chocolate cake, Penny’s Lemon sponge and Blackcurrant sandwich cakes, Rebecca’s Rocky Road crispy sticky tray bake, Gifford brought a chocolate square cake, not to mention the odd pork pie, and here I am with the squirty cream strawberry scones…Culinary joys aside, there were some sartorial delights, mostly in the shirt department, but Andy’s matching shoes and concertina deserve a mention.

Which brings us to the music. Thirteen performers last night and a fabulous range of music.

Rich and I kicked it off with Weather Bird (imagine you can fly) The Time Traveller (love, destiny and free will) and, Nightporter (imprisonment and torture) before we settled down to listen.

Martin Clappison’s set included a fine acoustic version of his band The Mighty and The Moon’s Broken Town and Got it Right, then a great surprise, he introduced Keely who joined him for a stage debut, a lovely duet of Welsh & Rawlings’ Ruby.

Four fifths of The Smugglers opened with Dan Britton taking the lead on Rolling Home and continued their traditional coastline folk with an absolutely beautiful rendition of One More Pull. Next in their set everyone was singing along with Herrings Head, rhyming Geordie guts and boots and all.

Next up, with a different take than The Smugglers on the food theme Jeff Parsons’ Nation of Animal Lovers had a poignant Pork Chop moment. Anyone twiddling on their phone in the audience had more food for thought during Jeff’s next song ‘Entertained to Death’. Then with a departure from his usual narrative style Jeff played a lovely nostalgic composition ‘Song of the Sea’. His beautiful sweeping guitar sounded like the tide.

Always great to introduce The Odd Poet – the bard of Snaith, Mr Roy Kibbler who never fails to entertain. Reading from one of his (excellent) books Roy professed to be dipping into the miserable old git, and  grumpy old git sections, but actually had every one in stitches (especially that rowdy bunch on Jeff’s table!) with his tale of old dog blues, Dunbarkin. All great stuff, woof!

Great to welcome back West Yorkshire’s Captain Chris Scarlett who sang a trio of infectious feel good songs which took us on a vivid nostalgic journey round England; people-watching from a park bench, and a day trip to Scarborough that was  so  descriptive that I’m sure I went on the same trip. The only bit he missed out was when my friend’s Dad lost his watch in the sand when we were playing cricket. Loved it.

Gifford Rolfe had a special treat to round off the night, his haunting song written when Gifford was working with the Telling Tales Theatre Company,  ‘She Didn’t Come Home’.  It’s a track from one of his excellent albums, packed full of terrific tunes – Dark Hearts & Strange Angels. I have been playing it over and over and absolutely love it. Joan Foye joined Gifford for a duet of Lucy Kaplansky’s The Tide. Joan’s voice is kind of like Melanie at times, and both Rich and I said the same thing when we got home, sort of reminiscent of Neil Young too. Can’t beat that.

That wrapped up a fabulous night again. Thanks to everyone who came to play or listen, not forgetting of course the delicious home baking. Again, we ate it all up, a sure sign of a top Loudhailer Acoustic night.

Oooo, nearly forgot not to mention The Odd Pork Pie!

See you next time, second Saturday of the month, so June 8th. All welcome, fun and friendly, come and join us!

Rich took some more pictures, click on one to enlarge and scroll through…

The Captain and Jeff 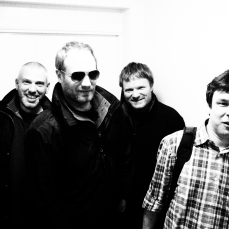