Not to be missed! Date for your diary, Saturday November 16th 2013…

Or email for to buy tickets.

Listen to a track 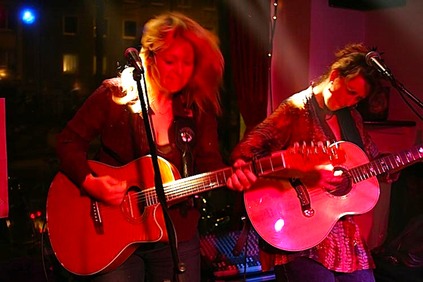 Vicki Genfan and Sally Barker met during the 2001 ‘Women on Stage’ tour in Germany and have been firm friends ever since. Vicki Genfan, the first woman to win Guitar Player magazine’s Guitar Superstar Competition, is a dazzling instrumentalist with a high-energy stage presence, who plays and writes with her distinctive percussive ‘slap-tap’ acoustic guitar technique.

Sally Barker, who was personally asked to open for Bob Dylan in Germany, is a singer’s singer and a songwriter’s songwriter. She has the ability to lift the words off the page and can move people to tears armed with that ‘bucket-full of soul’ voice.

Both Vicki and Sally draw their inspiration from folk, jazz, pop, soul and world music and a mutual respect for each other’s talents has prompted them to tour together again.

“If I could play like Vicki, I’d stay home and entertain myself.” – Steve Vai

Saffron Byass will warm up for Sally and Vickie with here serene songs from the heart with jazz, blues, folk and rock influences. Gonna be fab!

One thought on “Genfan and Barker”