July 4th 2006, we organised Independence Day as part of the Humber Mouth Festival. We invited William Nowik to come over from New York to perform with Kurdish musicians in the city.

The experimental New York songs and stories of William Nowik and Kurdish music and dance from Gul Naz and Nahro Zagros, culminated in Rich, Lou, William and Nahro performing a collaborative finale of William’s Wars & Forays and our Night Song.

An interesting union with the Kurdish band celebrating the American invasion of Iraq and hope of independence and William – an American – opposed and protesting to it….and everybody danced.

Violinists, Nahro Zagros and Emma Brown joined us in the Angel 6 quartet for a series of gigs and sessions. Here we are at the gig and at the BBC recording a studio session. 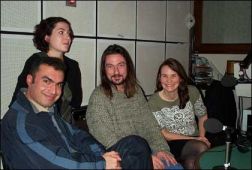 The Angel 6 Quartet in the studio

Next up, click here for Newton Faulkner and Nick Harper at our Winterlude festival.