We went to the most amazing concert last night, the fifth in Thomas Bertolotti’s super series of chamber concerts – Intimate Classics in the City – at St Mary’s Church, Lowgate, Hull for Hull2017. Tom invited Dexter to play a piece at the concert as a young local musician – and what a concert it was!

Award winning Brazilian violinist Francisco Coser currently at the Corso di Perfezionamento of Accademia Nazionale di Santa Cecilia played a stunning recital – from the familiar sounds of Bach and Paganini, Ysaye’s epic ballad to Enescu, to the less known but most dramatic Brazilian composer Flausino Vale. Francisco was flying, his performance was so full of intensity and verve, showcasing the underlying folk tunes in all the pieces with spectacular style. We were mesmerised.

Midway through the concert Tom welcomed Dexter to the stage and he played his piece, Hungarian Stomp accompanied by cellist Tom and Francisco. We hadn’t heard the arrangement – by Russian flautist, and previous Intimate Classics soloist, Ivan Alekhin before – so it was a great surprise, and a wonderful collaboration. At the close of the concert the full church of people gave a huge round of applause, what an evening.

Rich took this gallery of photos, click on an image to see the full picture and scroll through… 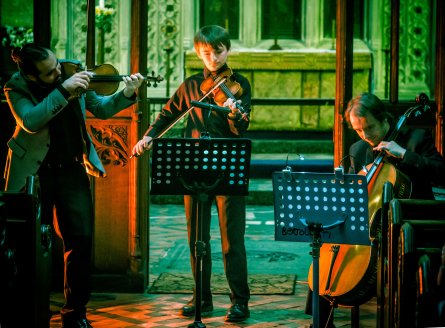 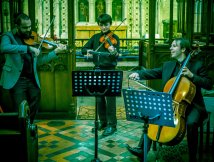 Massive thanks to Tom for inviting Dexter to play and for giving him the opportunity to do something that he (and we) will never forget. It has been totally inspirational for him to perform this specially arranged piece together in front of a big audience in a beautiful ancient venue.

I filmed a tiny video on my phone…

All the concerts are free of charge with a retiring collection for the church renovations. the next concert is 6 pm on 23rd June 2017 at St Mary’s Church, Lowgate, Hull.  It’s the final performance in the series and Thomas Bertolotti will be joined by guitarist Merlin Miller for a concert of cello and guitar duos and solos. See you there!