Thanks to everyone who came to play and listen at last night’s Loudhailer Acoustic. Candlelight, coffee and flap jack was the order of the day. We started off the evening by giving an airing to a brand new CD – National Debt – by the amazing Soft Shoe Sam. The album of bottleneck and slide tunes, all recorded totally live with no overdubs on a fine collection of National guitars must be one of the best collections of slide sounds around. The album notes say ‘recorded in U.S.A.’…yet something about it sounds strangely familiar…

The audience were treated to some extended and unusual sets of songs from the players, it was a thoroughly enjoyable evening. Everybody’s set was fantastic and there were highlights in every performance. Graham Beck and his Yamahahaha were on top form fresh from a show at Minster Records that afternoon and it was good to welcome Katie Spencer who played a heartfelt set, another second performance of the day. Dexter joined us on violin on two songs from the Auricula Suite, which was lovely.

A special mention to Andy Pyke and Alfie Juckes for their excellent version of Gifford Rolfe’s ‘Ride a Wild Pony’ is due. The first time we heard of Gifford was when Andy came to a Loudhailer Acoustic and played a song by Gifford back when we were at the cafe bar. I loved it so much I looked it up to find out more about it. Since then Gifford sought us out and we have become good friends with Gifford, Joan and Roy who have often come to play, and we look forward to meeting up again soon. 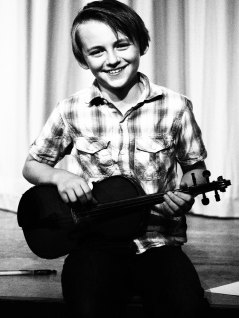 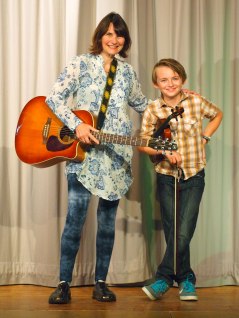 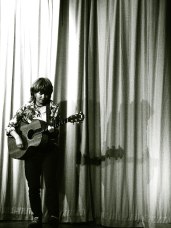 Graham at the end 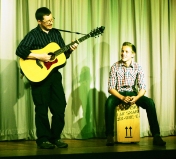 Thanks again to all, and to Chris and Rose and the Willerby Methodist Hall for having us. Next Loudhailer Acoustic is Saturday September 13th – keep an eye on the website and our Facebook page for details.

Rich & I – and the Loudhailer Electric Company with Jeff, Rich and Amanda – have a bunch of gigs coming up, it would be great to see our Loudhailer Acoustic friends there:

You can catch us at the Cornucopia Festival at Burton Constable Hall the following weekend.

Look out for the psychedelic electric folk experience that is the Loudhailer Electric Company at Hull Folk Festival on Sunday September 14th, and back at The Adelphi  on October 9th.

We area also putting on Sally Barker and special guest Vicki Genfan at The Back Room in Cottingham in September, tickets have now all sold out.