What an awesome three days of Songs of Freedom 2 Workshops at The Warren young people’s centre in Hull.  The sessions were full of amazing young people who worked with the tutors, Redeye Feenix, Ysabelle Wombwell, Liam Van Rijn and me to write, record and perform a host of superb songs about power and powerlessness in their lives. Songwriters, singers, rappers and instrumentalists worked together to to create a fantastic collaborative piece – Let’s Find The Power – featuring sung vocals, spoken word, rap and a chorus of brilliant catchy harmonies over a wicked beat with bass, sax, violin, funky guitar and keyboards. Everyone was buzzing at the dress rehearsal in The Warren Cafe this afternoon. Bring on the performances at the Freedom Festival this weekend!

Kali on the mic

Jess behind the video camera 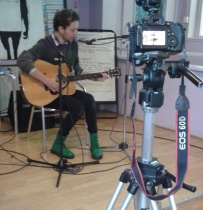 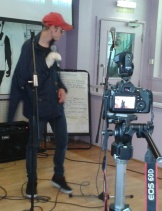 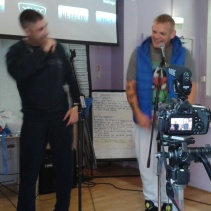 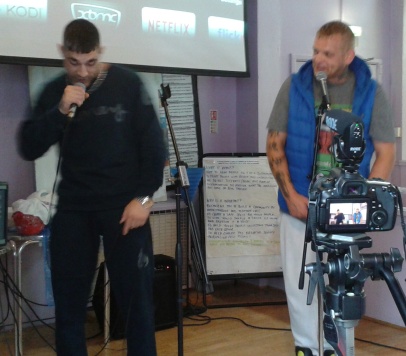 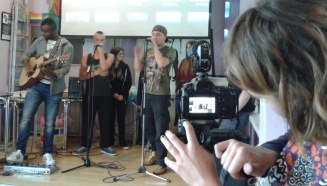 Adam on the mic

Songs of Freedom at The Warren

“A powerful protest song’s project giving young people a voice performing live at the Freedom Festival. In a bold creative fight-back against government cuts and youth poverty – the Warren Young People’s Project is building on the success of the pilot initiative to deliver Songs of Freedom 2. Working alongside skilled musicians and songwriters, the Project will support 16-25 year-olds to develop their vocal and performance skills through dynamic accredited song writing workshops which will lead to a live performance opportunity at the Freedom Festival.

In a bid to give young people a creative voice of expression, Songs of Freedom 2 aims to help young people vent their frustrations and channel anger in a powerfully positive way. Musician and song writers Lou Duffy-Howard and Ysabelle Wombwell; MC and song writer REDEYE and producer Liam Van Rijn will be on hand throughout the 4-day project to offer encouragement and professional guidance to aspiring young song writers. Can Do Learning Activist Heidi-Victoria Ireland and Kate Murphy will be on hand to offer additional support.”

Thanks to all at The Warren – Lisa Wedgner, project lead and Can Do Coordinator, Heidi-Victoria Ireland, Jess Harrison, Kate Murphy, John, Stew Baxter, Warren Records and studio and mostly all the fantastic young people of The Warren.