“…a magic album. What really draws out the juice is driving through the forest at night with the windows down – wind blowing my hair everywhere – playing it LOUD. I am sure the BIG Lizards and Bandicoots, Snakes and Owls think I’m extra-terrestrial as I whizz by. It is a very very rich experience…” Jungle Jim Ward, Byron Bay, New South Wales.

Album of the Year 2016: “Cursus is a wonderful album featuring nine original tracks of psychedelic sounds underpinned with a myriad of references to folk, classic rock and other genres.  The music is highly atmospheric, immersive and hypnotic with the ability to transport the listener to another time and place.” Across The Universal Soundscape

“C’mon, we’re gonna take you on a trip (the opening line of Night Heron) fits the whole album on two levels. Lyrically, the trip is like an open top bus ride around their locality with tour guide Lou giving you the lowdown. Musically, it’s more of a psychedelic trip with folky influences and some stunning playing.” Davey Hammond, Sounds Magazine

Loudhailer Electric Company are a new band with a big history, featuring ex members of seminal cult bands Red Guitars, Dead Fingers Talk, Nazca Nine and Planet Wilson. As Hull is poised to be UK City of Culture 2017 the band are evolving Hull’s legacy of psychedelic music with the release of their album of original songs, recorded by John Spence at Fairview Studio, mastered by Pete Maher, and with original album artwork by Charlotte Pugh.

The songs on the album tell a collection of stories, some featuring spoken word poetry and many of them influenced by the East Yorkshire countryside.

Lou explained: “The album title – Cursus – refers to stories of life along the Neolithic courses which lead to the tallest standing stone in the UK, at Rudston in East Yorkshire. Inspiration for our songs include legends about the Gypsey Race stream which runs through the Wolds, the bleak North Sea – and in the final song we take you on a trip a little further out west – to Lake Windermere.”

The band’s spoken word vocalist, Richard Duffy-Howard continued: “Other themes come from further afield. Listen out for stories related to some of our favourite movies, Paris Texas, Thelma and Louise and The Night Porter.” 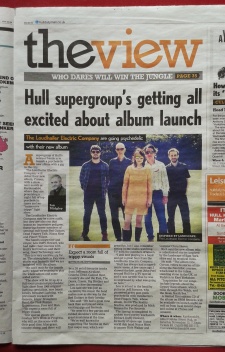 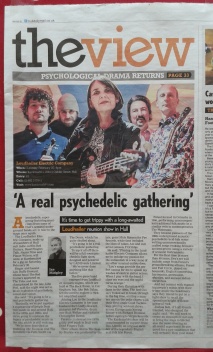 Read the first review of Cursus in Browse Mag here

“The raw hard-edged sound and screaming guitars were light years further on from psychedelia as I remember it and all the better for it! A new sound is among us!” S. Jones

“The room rocked from the first track to their encore.  If you do nothing else this year, get yourself to another of their Psychedelic Gatherings and enjoy their sound for yourself.” Nix Chidlow, Browse Mag

Listen to a clip of The Messenger…

Jeff Parsons – Influenced by The Who and American psychedelic bands, and with a first album produced by the late great Mick Ronson, Jeff’s upside down guitar style sends the Loudhailer Electric Company into orbit.

Rich Walker – Keeping it all together on the electronic/acoustic kit

Chris Heron – Classically trained violinist and with a passion for improvising folk, gypsy jazz, blues and flamenco. It all adds up to psychedelic strings.