Big thanks to everyone who came to Loudhailer Acoustic last night, and made it such a good easy going session. There were sets from three Richards and two Grahams, with a Lou and a Dex thrown in for good measure. There was a lovely spread of home made cakes & scones and I’m sure Jan’s delicious and fabulously sticky chocolate and strawberry science experiment will go down in the history of Loudhailer baking.

Rich and I opened up with our newest song, Only Love, homage to the people devastated by the war in Syria. It’s a sister song of our piano poem, Refugee, so we followed it with that. Dexter has figured out the Halo theme tune on the piano and performed it very smoothly.

The second of the Richards aka Dick Appleton manages to mix poignancy and playfulness in his inimitable performance. His songs of political and personal perception and prodigious string picking were punctuated by his poker face prattle…perfect!

Next up, great to welcome back Richard Poulson who opened with his Jump the Gun classic, Walk All Over followed by an excellent set including his unashamed pop rendition of Is She Really Going Out With Him? Richard brought the spirit of Elvis Costello to Loudhailer Acoustic again, and did I hear Bill Horncastle contributing from the stalls…where? where?…

It was fabulous to welcome Graham Brady, whose songwriting is sooo classy, like an edgy Paul Simon. Listen out for a smattering of hidden gems lurking in Graham’s dark side stories. Matched by catchy and dancy rhythms and cool Cream kind of riff in Don’t Cry, there is something really special in Graham’s low key persona. Alcohabit was just brilliant.

Graham Beck had a special surprise in store, I suspected it as soon as I saw that he was wearing red sneakers. But first a laid back Bubble Wrap and a smooth debut performance of the psychedelic Varian Tye. Then, out came the prop…and what a prop. The image of Graham setting his keyboard going, running behind the curtain and striding back with a huge red Lego brick head (face peeping cheekily out) is something I will not forget. Just about everyone in the audience popped up with a big grin and a mobile phone camera too. Yes, Lego man sure did come to town. Well, to Willerby last night anyway. With an encore of that Cracker cover…no, Camper Van Beethoven – about Doris Day…no Marilyn Monroe, hang on who was it? Or a blonde Yoko Ono eh Dick? Well, it was fab.

Rich took these photos, click on an image to enlarge and scroll through…. 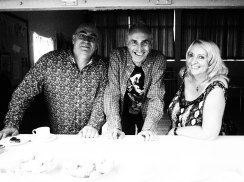 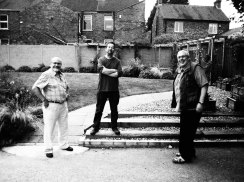 It even says Lego on each bobble! 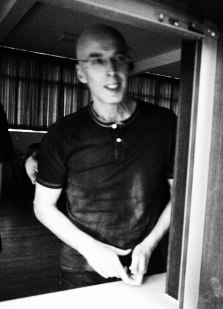 Thanks to everyone who made such a great audience and to the Willerby MC Hall for having us. Next session is August 9th. Before then, don’t forget, Rich and I would love to see you at our Loudhailer Electric Company gig at the Adelphi on Thursday July 31st, and we are putting on Sally Barker with special guest Vicki Genfan at the Back Room in Cottingham on Sat September 20th.