This is a newly created video for Red Guitars single Steeltown. It combines the opening sequence of Penny Woolcock’s 1987 film “When the Dog Bites”, shot in Consett, with some footage of Red Guitars performing “Steeltown” at the Leadmill, Sheffield on January 28th 1984.

Steeltown was one of the Old Grey Whistle Test. The band was supposed to be picking me up at Woodall services, but something went wrong and I had to hitch a lift. A hippy in a Morris Minor used the sun instead of an A-Z to get me to the BBC. We drove all round London. I got there just in the nick of time.

Consett Steelworks, once Europe’s largest, was closed down by the Thatcher government in 1980. The song Steeltown was inspired by a visit to Consett in the aftermath of the closure when its devastating impact on the local community was becoming apparent. 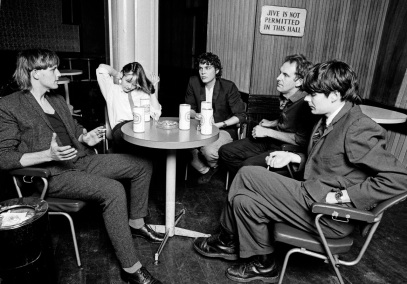 I hear the steeltown is closing down,
All the mills are rusting.
Everybody’s got a new car,
With the redundancy money they pay.
Things are looking grim,
See the wolves, they’re closing in.
It doesn’t matter how I vote,
The same confederacy of fools get in.

Eh-arrumba sing a simple song,
Steeltown is closing down.

Steel is the backbone,
Of every modern nation.
Mills are closing down,
There’s an end to moderation.
The pound is coming down,
Economy’s inflating.
People on the streets,
It’s the second industrial revolution.

Steeltown was recorded at Fairview Studios, Willerby. The track was released in 7″ (SCAR010) and 12″ (SCAR010T) formats on Friday 22nd of June 1984 by Self Drive Records. Both versions had Within 4 Walls on the b-side.

The band performed Steeltown and Fact live on the BBC’s Whistle Test on Friday 20th January 1984.