Thanks to everyone who came to Loudhailer Acoustic last night. Rich was sorry he couldn’t make it as he was hoping to wear his new shirt to rival the likes of Jeff and Gifford…so be sure to be prepared next time (and have a look at the gallery below for a sneaky preview)

I had to multi task  hence the lack of decent photos. You can see that we had a superb array of home made cakes, Bev’s Devon Butterfly Buns, The Carrot Cakes of Joan and Maria, Penny’s Victoria Sponge, Gifford and Roy supplied pies, I made flap jack. So, cakes sorted, down to the music.

We managed to squeeze ten fabulous sets into the night. After my lonesome opener – Paris France for a change – Graham Brady hit the stage with Where’s my Coat followed by his 1984 classic Iced Chicken, Nice day, and later on his sunglasses ditty.

Next up was a real surprise, especially for me. Asa  – inspired by Donnie Darko – played the piano and sang Mad World. It was his debut performance, and it was lovely.

Jeff Parsons was on top form last night with a trio of songs from his new set of social commentaries, all excellent. I’ll be surprised if anyone doesn’t think twice about not voting after listening to Jeff’s Fifteen Minutes of Democracy.

Great to welcome back Alyx Tamminen with a top set of brand new poetry coolly delivered and a suggestion of a special Loudhailer poem in the pipeline. Looking forward to it (challenge!)

Dexter came along especially to see Gifford Rolfe who was on great form, and together with Joan Foye brought the spirit of a summer of playing songs in Mediterranean bars and beaches to Willerby.

Andy Pyke’s easy going guitar songs were punctuated by a real change when the audience joined in with his fine a capella Down by the River, from the Coen brothers film O Brother, Where Art Thou.

It was brilliant to welcome back the Brummie Bard of Snaith Roy Kibbler. Roy’s engaging Flower Power Festival themed set was entrancing. I looked around at the audience and saw every single person captivated and full of smiles.

The penultimate guest of the night, Geoff Pink Panther Durham, back from Gran Canaria, opened with Don McLean’s Homeless Brother, lovely words ‘That homeless brother is my friend’, and included his namesake Durham Town in his set.

Topping off the night, the icing on the cake as it were, a big welcome for the only person to sport the Knees on Show theme this month, Karl Oakes. Karl was challenged by his brother to write a song to accompany his screenplay of the amazing tale of Whitby lifeboat ‘Robert Whitworth’ and The Visitor’s 1881 shipwreck at Robin Hoods Bay. I can’t wait to hear a recording of Karl’s amazing epic song of the tragedy and incredible rescue. Rather than Karl’s SurroundSound guitar extravaganza, the audience contributed sea sounds this time.

There was just time for a cake break and a song each from our West Yorkshire guests including Gifford and Joan’s lovely version of Diana Jones’ If I had a Gun before we wound up the evening.

Thanks to David and the team at the Willerby MC Hall and a big thanks to everyone who comes to listen for being a brilliant audience.

Looking forward to Rich being back for next month’s Loudhailer Acoustic session, second Saturday of September, so 14th. All welcome, see you then!

A peek of Rich’s shirt 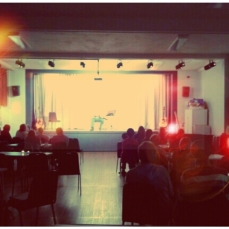 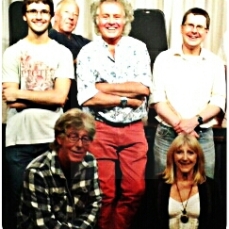 Some of the Loudhailer Crew