What a lovely evening at this month’s Loudhailer Acoustic once again. We were treated to terrific tunes from new and familiar friends, an awesome audience and an enviable spread of cakes – strawberry, coffee and walnut, carrot cake, chocolate cookies, peanut butter delights, Bev’s butterfly muffins, and Irene’s most delectable cheese scones. Yum.

Rich & I played a couple of songs to open the show and then welcomed for the first time to Loudhailer Acoustic No Parking For Caravans – Andrew Dolman and Leigh Lawrence – who played a cool set with a touch of melancholy – very good to hear some acoustic bass to boot. It was great to have Katie Shepherd next on the bill, it’s been tooooo long since the last time – Katie’s songs are special with a real edge, fabulous songwriting, come back sooner next time! What a really nice surprise to see our good friends Gifford Rolfe and Joan Foye come through the door armed with guitar, harmonica and a bunch of gorgeous songs. A lovely close to the first half before we tucked into more coffee and cake.

Graham Beck opened the second half and I could see grins all around the room during Graham’s poignant and passionate ode to…a piece of sweetcorn. Toes were tapping and heads nodding for his awesome aria about a certain supermarket chain’s stock of plastic gnomes. But it was the first song Closed on Thursdays – about his home town of Great Yarmouth that showed off his superb piano skills which sometimes get hidden amongst the humour. Similarly for our next guest Dick Appleton – who played two lyrically well crafted songs which had everyone grinning again – but his guitar instrumental, The Five Sisters of Kintail was an absolutely beautiful, haunting piece of music which I could listen to all day. Wonderful stuff. Last up, and with a dashing end to the evening was Mr Karl Oakes who played a brand new and  impressive spoken-word-set-to-music piece ‘I Used To Hate’. In excellent voice last night, it was hard to beat, but Karl’s mash-up version of his classic Hull City of Culture anthem ‘From the Ferens to the ABC’ came up with the goods for sure.

Rich took the photos, click on an image to enlarge and scroll through…

Corey played some cool Junior Kimbrough after everyone had gone

No Parking For Caravans 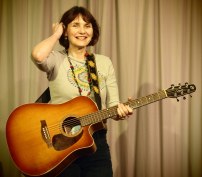 For those who missed it, this is Dick’s beautiful instrumental, The Five Sisters of Kintail…

Thanks to everyone for coming along, and to the Willerby MC Hall for having us. Next session Saturday 10th May, all welcome to come and play a few songs or listen. The music starts at 8.00, looking forward to it already!