April 14th 2012  A completely full house again last night. It was Margaret’s birthday and we really enjoyed the evening.  Eleven performers, all did great sets.  Everyone plays totally acoustically to an attentive and appreciative audience.  After ‘happy birthday’ and the blowing out of the candles we kicked it off as usual and then were entertained for the rest of the evening. Thanks to all the performers. Carrie was fab,  Trevor Appleton sang three lovely Dougie MacLean songs (check out his East Riding acoustic website and don’t miss Dougie at Brid Spa on June 3rd),  great to see Karl Oakes back from the Buddleia incident and with brand new songs, only hours old. Julie Nadian sang beautifully – three songs we hadn’t heard before. Martin Clappison was brilliant and got a standing ovation.  I love Val Marshall’s own songs and really enjoyed her version of Neil Young’s ‘Old Man’.  Matt & Dan Britton & Nick sang three fabulous traditional songs, did an encore and had everyone singing along. Thanks to Paul and Laura Atkinson.  The next session is on Saturday May 12th and some tables are already booked, so if you would like to come call the cafe (01482) 659350 and book a table. You don’t have to eat (although you can do if you like) and you will have a nice place to sit.

Fabulous performances again last night. We opened up with some of our new Auricula Suite songs and then welcomed Carrie & Ben Martin; Matt, Dan, Andy and Nick; John back from Cuba with the story of the Cuban Man;  Martin Clappison; and along the road from Malton, Dave Swann.  Thanks to everyone who played or listened – and sang along, was great!

Loads of terrific performances, cafe warm and cosy and totally full up. We finally remembered the camera and seeing as pictures speak louder than words here they are. Gotta mention Karl’s SurroundSound tho, all guitarists (banjo, mandolin and little Martin gtr too) playing together around the room – and everyone singing… 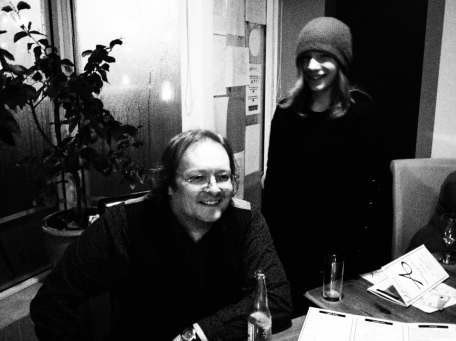 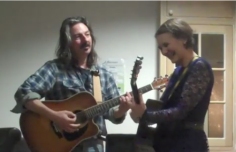 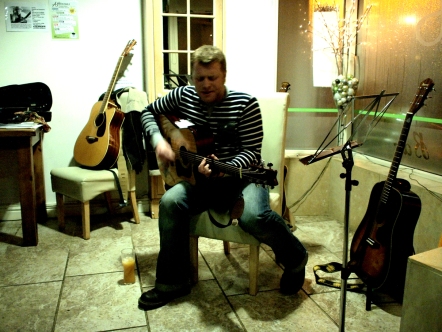 Nick Andy and Matt join in the SurroundSound

So, thanks to everyone who played – Carrie Martin, Karl Oakes, John, Martin Clappison, Matt Britton, Andy and Nick, and  Dexter Violin. Book early for March 10th, is likely to be booked up before the night.
.
January 14th 2012
Last night’s session was a perfect start to the 2012 season. Thanks to everyone who came to play or listen. It was frosty outside but cosy in the café. We were treated to great sets from all seven musicians and a good smattering of audience participation.
.
We opened up with our Sam Shepard inspired road song Hawkmoon and then Dexter joined us on the violin for the most English of our Auricula Suite songs – thanks Dexter, you’re in the band!
..
Next up – fresh from the excellent and highly entertaining Cotton Gussets reunion at the Adelphi last night – Karl Oakes. Karl’s set included the newest song of the night (written during the afternoon) and some terrific choruses in Shout it Out, Shout it Loud, everyone joined in with gusto.
.
It was great to welcome Matt Britton back to the cafe.  He played three beautiful songs of salt,  sea and …New York whores. We love Follow the Heron Home.
.
Andy Pyke started his set with an emotive song – Ride a Wild Pony – written by his friend West Yorkshire artist Gifford Rolfe.  Andy played a mixture of self-penned songs and familiar favourites. Visiting musician Mike Rogers was having a night off from performing but provided some welcome harmonies in Andy’s a cappella Down in the River to Pray, and we all joined in with Andy’s Dougie Maclean finale.
.
Cowboy DC’s original Americana style songs closed the first round of performances; all feel-good stories, sometimes reflective, always catchy tunes. Hey, ‘There’s a storm brewin’ (me, still singin’ this morning)…
.
We had another round of songs, and when Alex started dancing round to Cowboy’s Babylon I thought we’d better close the show with something lively so we all howled like the Werewolves of London.
.
Thanks to all and see you next time – Saturday 11th February, don’t forget to book early; and hey, put the 24th Feb in your diary too.
.

Christmas Special Thursday December 29th The winter solstice has been and gone,  so lets call this the first spring session. Full house as usual and we had a double session, starting at 6 pm for the Early Birds and ending late for the Night Owls. Great entertainment and some fab Christmas collaborations from Karl and Alyx, Rich, Lou and Dexter, Corey, and Neutral Tones – Carrie and Gary Burnett. Thanks to everyone who came to play or to listen, it was a great evening. Book early  for the next session, the cafe has been full for the last five months.