What an exciting night we had at Loudhailer Acoustic this month with an astounding variety of music and performance. I felt like we’d been on a journey round the world by the end of the night. Rich and I opened the show with a couple of our new Wild West songs before we headed straight over to Belfast with Dodge McKay’s set of his beautifully performed Irish story songs. The Street’s insight into life growing up on the same street as Stuart Elliot’s family and I Remember You – both from Dodge’s album – and his a capella tale, made for a captivating start to the evening. Andy Pyke and Alfie Juckes’ set took us over the water again – well, under the water – in Walt Grace’s submarine with their groovy guitar and cajon duets. The audience were captivated once again by Catherine Scott’s awesomely astute spoken word performance: a playful and touching tribute to her sister – Sweary Mary, her quirky take on growing old with panache and newest poem about the takers and shakers in the world news.

Next up we were delighted to welcome Jackson D to Loudhailer for the first time. Rich and I have played on the same bill as Jackson and drummer Zach recently and they were better than ever – as cool and strange as Twin Peaks. Jackson’s exceptional songs, stylish show, classic guitar sounds & superb theatrical vocals were a real highlight.  Accompanied by Zach’s nifty brush work on his pared down kit – what a fine set, and a real highlight. Next up, how good to welcome our Loudhailer Electric Co band buddy Jeff Parsons back after an acoustic abeyance. Jeff picked a terrific trio of his songs for the occasion. His surreal and compelling Food for Thought, sandwiched between the reggae rhythm of Sport is War and his whimsical Short Term Memory was particularly thought provoking for sure.

Time for a chat and a beer before the second half opener, the eccentric and increasingly fantastic Graham Graham Beck, whose set included a chemistry set, a seven foot rabbit and a piano duet with an antique Red Devil puppet. All around the room the audience looked astonished by Graham’s crazy entertaining songs, proficient piano pinkywork and fine voice – fairies wear boots and you better believe him… Next on the bill we were treated to the wit and wisdom of ace fingerpicking guitarist, Dick Appleton, always a top show, followed by Vivian Querido’s beautiful solo violin. Full of expression and variation, Vivian’s Hungarian pieces contained tunes within tunes, changing rhythms and textures. There was a fine welcome for our penultimate guest, Emily Thompson. Again, Rich and I have played on the same bill as Emily a couple of times recently and the good atmosphere of the Back Room really showed off her cool, calm presence and beautifully clear and true voice. For the finale of the evening there was a big cheer for killer blues harp player Brian Williams, tonight sporting his full one man band of boogieboard, bones, whoops and hollers, and a set of stomping good tunes. 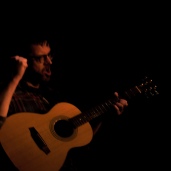 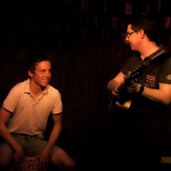 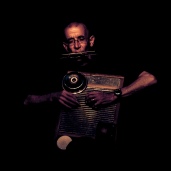 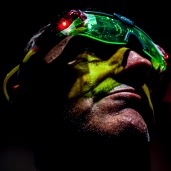 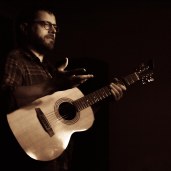 Thanks to everyone who came to play and listen, a lovely audience, fabulous performances all round and to Paul Sutton at The Back Room in Cottingham, a great live music venue.

Make a date for next Loudhailer Acoustic, the first Thursday of the month, so September 3rd – full details here, be great to see you there!