It was half time when I arrived at Loudhailer Acoustic last night, straight from Dexter’s school. Rich was holding the fort and I was struck by the great atmosphere in the room, everyone chatting and having a beer, it was great to be there albeit late. Graham Graham Beck opened the second half with a laid back spacey set. From ‘Nerves’ he took us to the moon and back with a Caribbean lilt, and then played the coolest rendition of For Your Love which went down a treat.  Brian Williams unpacked his band-in-a-bag and played through early 20th century jazz and 20s blues before topping off his set with a brilliant 50s rockabilly blues harp style full (one man) band boogie – whoops and hollers included. We were journeying through the decades, and Dez Allenby set the scene with a fabulous real McCoy 1960s vibe for the rest of the evening. After a cool early days Bob Dylan song, Dez invited Cathy to the stage for a folk duet with gorgeous tranquil harmonies, shruti box and English concertina and Kind as the Summer, complete with telescopic shakers. 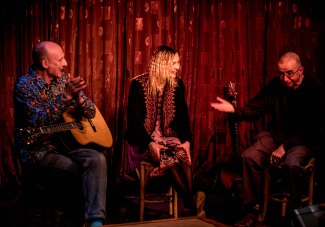 The modern day 60s theme continued with our next duo, a new collaboration between Jeff Parsons and Lola Waslin. Their sartorially super performance started with Rainbows and closed with that time when you jolt awake in the middle of the night. Between the two songs Brian joined them for the terrifically bohemian Tripped Up, showcasing Lola’s lovely vocals, Jeff’s cool guitar and take it away Brian the harp. It was really great to welcome Phil Friend to Loudhailer Acoustic for the first time to close the show. Phil started with a modern protest song Groundbreaking, before Dez joined him with a swooping whistle accompaniment which took me to an afternoon in an English meadow. The last song of the evening was a fabulous surprise. Written by Phil after he’d been inspired by listening to our Loudhailer Electric Co. ‘Night Heron’. Children of the Forest was right there in the spirit of 1968, complete with mystic tuning, what a lovely carefree end to the evening.

Chatting again at the end of the night Rich said that everyone in the first half was brilliant. Pete McLeod’s wonderfully friendly start to the evening, Karl Oakes’ fantastic back in the saddle set, Gifford Rolfe and Joan Foye’s Americana tinged set and Roy Kibbler’s sizzling performance poetry and Pete’s chromatic harmonica tunes including a transfixing Midnight Cowboy. And how could I miss Jim Orwin’s Rock n Roll Suicide. Rich said it was ace.

Rich took this gallery of photographs, scroll though and have a look… 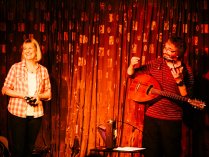 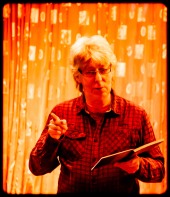 So I picked on you oo oo 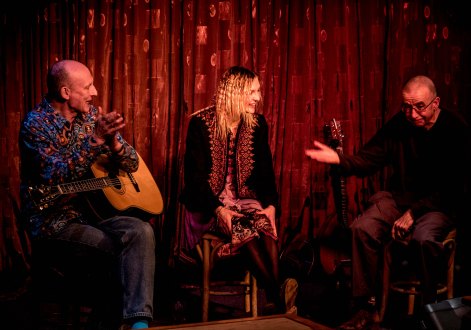 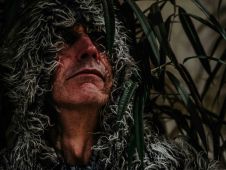 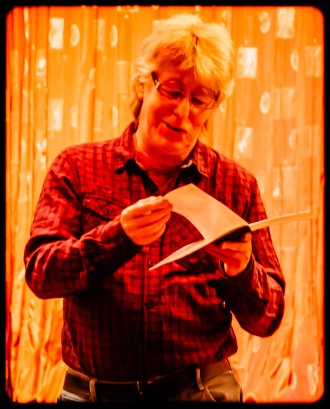 Thanks to everyone who has come to play and listen, and to Paul Sutton at The Back Room in Cottingham, a top live music venue.

Last call out for our psychedelic gathering on Saturday 20th Feb, where the mighty spaceship Loudhailer Electric Company will dock at the space station Kardomah94  where we shall unleash our goodvibe guns and euphoria torpedoes! We’ll be in the good company of the legendary Dez Allenby with his acid folk set, and illuminated by the mind blowing light show of L.A.D Events Limited. It would be brilliant to see you there – come and join the party! 8 pm, tickets from us, or the venue.

Coming up in spring, Loudhailer Seaside Special at Filey Folk Festival on the bank holiday weekend 20th April/30th May. Full details and line up here.