It was cold outside, but warm and cosy in The Back Room last night at Loudhailer Acoustic.

There was a great audience to appreciate a fabulous range of acoustic music, quality songwriting and some familiar classics from a host of performers – 11 amazing sets of three songs. After rocking out last month Rich and I opened up with a couple of our more folky compositions and then first up was Katie Spencer with a lovely performance of three great original songs that we hadn’t heard before.

It’s always good to welcome new musicians to Loudhailer Acoustic and we had a double whammy next. First up, Graham Wilko Wilkinson played the blues three ways on his red ‘Black’ guitar (I must go fishing one of these days) and then we were delighted to introduce Vivian Querido who we met up with when we both played at Cornucopia Festival. Vivian treated us to the most beautiful haunting violin pieces including two of her gorgeous original compositions, inspired by music from North Africa and South America.

There was a big welcome back for Karl Oakes, with something different again. This time he perched right at the end of the stage and played a brand new set of songs, the first with a cool one handed guitar line (so easy you can play it with one hand tied behind your back). He invited guitarists in the audience to join in ‘SurroundSound’ style – so it was fun too. Closing the first half was a storming set from Brian Williams whose delta blues harmonica songs complete with whoops, hollers and some robust participation from around the room made for the best set of feel good songs about being dead and buried that I’ve ever heard for sure. Totally fab!

Second half opener Graham Graham Beck was warming up for his gig with The Crazy World of Arthur Brown and he debuted his brand new song What Lurks behind the Fireplace. Some great doffs of the hat to classics by…Arthur Brown amongst others were very well received, but the funniest thing I have seen for ages occurred during Graham’s rendition of Kate Bush’s Running up that Hill. Graham’s covers can be pretty off the wall to say the least, but what happened last night was brilliant. If unplanned. I just couldn’t stop laughing. You’ll have to ask him about it.

Hard to follow, but Andy Pyke and Alfie Juckes came up with the goods with a set of their versions of favourite songs with a real feelgood quality. Alfie’s really excellent cajon playing is so cool and tasteful – a perfect complement to Andy’s easy going guitar and vocals.

I know we’ve said this before but Jim Orwin’s songwriting is absolutely stunning. I was mesmerised throughout his set. One Bridge (Indiana Jones) was beautifully sung and is still going round in my head. Similarly with his two new songs Solitude Youth and Fear, and Inevitable (Seven Tweets about Facebook) – amazing and engaging.

Jeff Parsons has been a regular at Loudhailer Acoustic since the early days and since then has had a superb songwriting renaissance. Many of Jeff’s songs have an often controversial message, so his set always provides food for thought (pork chop). Perfectly timed for this weekend were Poppies, and now that Christmas has already started in the shops, The Man from Galilee – which features a fantastic and classy guitar riff and beautiful melody. Song of the Sea led us to the final performance of the evening, from the South Bank’s guitar maestro Dick Appleton. With his dry entertaining humour and fantastic pinky work, Dick’s finale included his tale of the One Legged Duck and a Beatles instrumental medley was a great note to end the evening.

Thanks to everyone who came to play and to listen to the music and a special thanks to our host at The Back Room, Paul Sutton. It’s a brilliant venue and we are delighted to be there. Bring your friends and please do let people know that it’s a top night out listening to the music at Loudhailer Acoustic. There was a great audience there last night, and room for more!

Keep a look out for other gigs at The Back Room. Paul puts on some top bands, many from the States, so a chance to catch some great blues and Americana.

Loudhailer Acoustic dates for your diary – first Thurs of the month as usual, so:

Thursday 1st January – Yes, it’s New Years Day. Let’s blow away the Christmas cobwebs and start the year as we mean to go on – with fantastic live music! 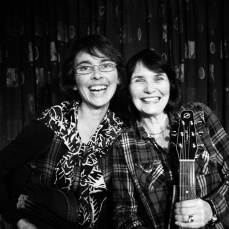 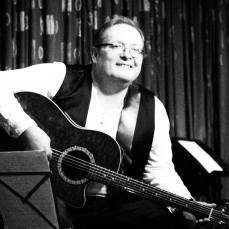 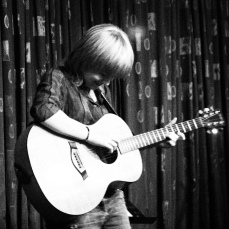