Well, last year we expected the Loudhailer Acoustic immediately after Filey Folk Festival to be quiet as everyone was folked out – but it was packed. This year, we thought it may be the same, but as it turned out it was a quiet, and very laid back evening. We all sat at the tables near the stage and the atmosphere was like a Filey Chill Out session. I don’t normally drink when we’re hosting an evening, but felt so relaxed that I tucked into a huge glass of red – which caused me to throw my plectrum into the air during the first song. I thought I managed to pick it up pretty niftily though, and then sat back and soaked up the sounds. Thanks to all the people who came to play, it was lovely to sit and chat too – Dez and Cathy Allenby, Jim Orwin, Vivian Querido, Martin Peirson, Brian Williams and Barry Cundill. Click on an image in the gallery and scroll though… 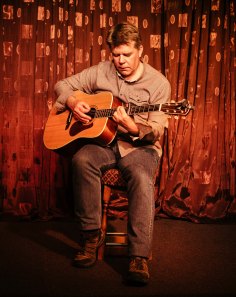 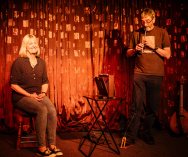 If you’ve seen Nick before you’ll know that he is an amazing performer – a superbly passionate singer songwriter and guitarist extraordinaire. He’s full of terrific stories, and fabulously entertaining. If you’ve never seen Nick before you are in for a treat for sure. Here’s some more about Nick…

Son of the legendary UK singer-songwriter Roy Harper, Nick has played the guitar from the age of 10 and surrounded by the likes of Keith Moon, Jimmy Page, Robert Plant and Dave Gilmour as he grew up, it was no surprise when Nick made his recording debut on his father’s Whatever Happened to Jugula? album in 1985.

To call him a superlative singer/songwriter could put his highly lauded guitar talent in the shade, and to call him a guitarist’s guitarist might slight his distinctive, soulful voice and passionate songs. Not forgetting the wild ride that is one of his live shows – from personal introspection to biting political satire via a charmingly caustic wit that would make Groucho Marx proud. He often segues from his own compositions to well-loved covers he makes his own – he takes on Presley, Zappa, Jeff Buckley, Led Zeppelin, Monty Python, Pink Floyd and Public Enemy (yes, on an acoustic guitar). He also has the alarming ability to break guitar strings almost by sheer force of will… and then change them without dropping a beat. For over a decade, he has been dazzling audiences and reviewers alike with this heady mix of virtuosity, boyish charm, showmanship and sheer bravado.

Nick recently played guitar on recordings for Lana Del Rey and Newton Faulkner. Harper fans may recall Newton Faulkner supporting Nick back at the Lamp in Hull for the Winterlude Festival of 2005.”

“Frank Zappa would have been impressed… he deserves to become a major figure in his own right.” Robin Denselow, The Guardian

“Dylan for the iPod generation…Betjemen with a guitar.” Guitarist (UK), February 2006

Thanks to the Back Room and Robbie who looked after us at the bar. See you next time – the next regular Loudhailer Acoustic is the usual first Thursday in June, so, June 2nd.