We are delighted that our album of songs inspired by the beautiful flowers – The Auricula Suite  –  is released on the DHM record label on March 6th 2017.

“An album of songs by an East Riding group, The Auricula Suite Ensemble, telling the story of a historical journey to a new land inspired by tales of the alpine flower – the Primula auricula – and its 16th century journey to England is now released internationally on the DHM record label. The Auricula Suite is a tale of love and loss, persecution and a new beginning, written and recorded by alternative folk musicians Rich & Lou Duffy-Howard.

Auricula gardener Rich explains, “I have a growing collection of Primula auriculas, and the idea to write the songs began when we discovered the fascinating story of how they were made popular here by the first people to be called ‘florists’, the Huguenot refugees.”

Songwriter and composer, Lou continues, “This fascinating story still resonates today. The Huguenot people brought horticultural skills to England when they sought refuge here 500 years ago. Settlers from war torn lands are making new lives here in Hull, today. Music brings people of different cultures together, overcoming adversity and creating something new, and this is reflected in the album.”

Guitarist and vocalist, Rich and Lou invited special guests Amanda Lowe (hammer dulcimer), Quentin Budworth (hurdy gurdy) and Corey Clough-Howard (guitar on My Ancestors were French) to form the Auricula Suite Ensemble. The East Riding of Yorkshire based musicians have a rich musical history, having performed at a range of world fusion and alternative music venues and festivals throughout the UK and Europe. 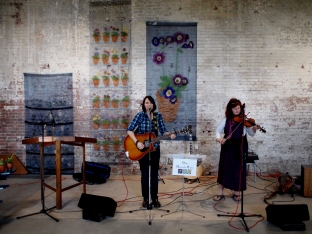 The Auricula Suite featured in Rich and Lou’s ‘My Ancestors were French’ heritage project – music, art, film and poetry telling of a journey to a new land. Part of ‘All Our Stories’, in support of BBC2’s ‘The Great British Story – A People’s History’ it explored what it feels like to be a stranger in a strange land. The group performed The Auricula Suite concert at the National Trust’s Calke Abbey in Derbyshire, home of the oldest surviving Auricula Theatre in England.

Lou explained: “Since our concert at Calke Abbey in 2013 we have gathered a lot of followers in countries where the flowers are popular – Belgium, Holland, Scandinavia and as far afield as Japan, so we are delighted that the album is now available worldwide.” Hannah Robinson HDM 8.3.17

Listen to a track from the album illustrated by some of our auriculas, grown and photographed by Richard Duffy-Howard.

“The music was intricately beautiful, the songs informative and real, the performers were fascinating to watch and the whole entertainment and feel of the evening was celebratory. The interweaving of the instrument sounds and the vocals painted exciting pictures…get the CD it is a beautiful recording of the material. ” Gifford Rolfe Music

“What a fantastic evening the Auricula Suite concert is – beautiful people, music, and flowers. A room bursting with colour, love & enriched with mesmeric music…we all absolutely loved it!” Lynn Beaumont, Once Upon A Time Bears

The Auricula Suite is written and performed by Rich & Lou Duffy-Howard (guitars and vocals) with special guests Amanda Lowe (hammer dulcimer) and Quentin Budworth (hurdy gurdy) and Corey Clough-Howard (guitar on My Ancestors were French).