It was a bumper edition of Loudhailer Acoustic last night at The Back Room. We were treated to an amazing eclectic selection of performances and there were magical moments in every set. Rich was taking photographs so Dexter and I opened up with a violin/guitar duet before Karl Oakes’ ace set kicking off with his new protest song Iron and the Viper and including one of my favourites from The Invisibles days, Like Rain.

It’s always brilliant to welcome Gifford Rolfe, this time straight from the studio where he is recording his new album. It was especially good to hear two of Gifford’s brand new songs, the first, Unsung Stories, with a join in chorus, and the second Long Time Ago featuring a fab Giff Riff (thanks Roy!) and some lovely nostalgia. Joan Foye can certainly pick a mean cover and mesmerised us with Gretchen Peters’ song noir, Blackbird. You can’t beat a good murder ballad.

Next up, Chicago Bound made a great sound with some of their fabulous foot tapping blues. Rich put his camera on a table and accidentally made a cool video of them playing their rendition of Little Walter’s Mellow Down Easy. A great set from harp wizz Brian Williams and Graham Hyde’s cool boogie blues on the resonator. You’ll see the vid later on….

It was brilliant to welcome an old buddy to Loudhailer Acoustic. Dodge McKay played three songs from his new album, Yesterday, Today and Tomorrow. Dodge’s Irish story-songs have an understated delivery, a little reminiscent of the wistfulness of some of the songs on Rust Never Sleeps, and were cool and beautiful. Back in the day when I was in The Planet Wilson we had a fab time playing gig swaps with Dodge’s Belfast band Ghost of an American Airman. We played some ace gigs with them at Belfast’s legendary Errigle Inn and Coleraine University – where the countryside and coastline is stunning. The band came to stay with us in Hull and played gigs with us here. We all had fun on the road. Then I didn’t see Dodge for 20 odd years, so it was a real surprise to find out he stayed here in Hull, despite the shock of experiencing steri milk on cornflakes on his first morning!

Graham Brady’s set was as edgy as ever, and his throwaway humour is an unexpected counterpoint. To be driving across America for 17 years with the corpse of your lover in the passenger seat is one thing – but for it to be smiling and wearing a brightly coloured hat is something else. Does that make it rare happy Graham song? Yes, I think it does.

The lovely Frankie Flowers took us on an entirely different journey and rounded off the first half perfectly with a favourite cover and then two original songs with an easy delivery and feel-good country flavour. 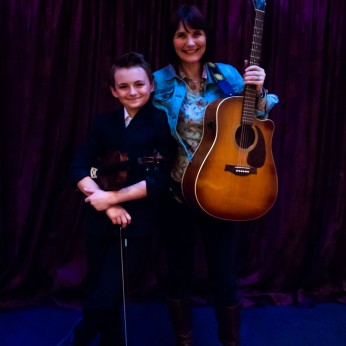 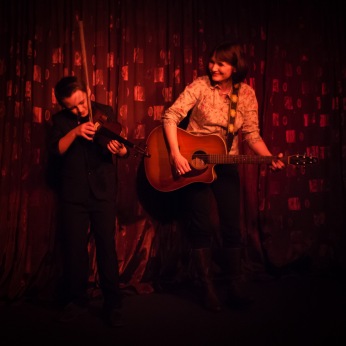 We opened the show

Time for a beer and a chat. Although it’s school holidays Dexter was tired out so Rich took him home, so apologies for lack of photos.

There was a West Yorkshire reunion happening last night. First up, Andy Pyke hit the stage with his set of high energy covers. Then Andy’s Dad Geoff who had special dispensation from his usual club in Ossett entertained us with three folk songs including Irish songwriter Anthony John Clarke’s song observing life in Ireland. There turned out to be an Irish thread to the evening too.

Our very special odd poet Roy Kibbler was on top form with his astute word-smithery and a selection of his poems, a fine mix of fun, politics, good humour and grump. Ace.

Jim Orwin’s poetic lyric songs made for a perfect flow and I was entranced once again. Jim’s songs tell enthralling tales, although not necessarily autobiographical. But his superb Half Ballad for Bobby Pearce is a true story and his introduction last night made us hold on to every word.

Last month when I played at Kardomah94 with Celtarabia, Chris Heron opened up for us with his violin and guitar loop station and a set of top songs. So we were delighted to welcome him to Loudhailer Acoustic for the first time last night along with Matthew Burton on classical guitar and percussionist Alan Drever-Smith. They are a fabulous combination opening up with a quirky gypsy style version of My Favourite Things which had everybody in the audience smiling from ear to ear. Matthew’s composition ‘Ricochet’ was a real highlight – superb intertwined guitar and violin, amazing box-of-tricks percussion, fantastic heads up playing and big smiles all round.

Smiles continued with the show finale last night, taking a break from mixing his new album (we’ve had a sneaky preview, it’s gonna be ace!) and highly anticipated by last night’s audience, the inimitable Graham Graham Beck. Any set that includes Fairies wear Boots, a song full of Nerves and the most fabulous opening couplet ‘I like nothing. I also like drinking tea’ has got to be good by me. It sure was a top closing set for a top night!

Just before we finish, thanks to Dodge for joining me to pick the numbers out of the hat for the Northern Rail draw for two pairs of train tickets to be used anytime this year – and ideal for travelling to Filey for the festival. It was great that both lucky winners were there last night, Andy Pyke and Karl & Bev. Enjoy the trip!

Thanks to a great appreciative audience and to everyone who came to play. Thanks to Paul at The Back Room – it’s a great music venue – and to Robbie for holding the fort and serving the cold beers last night. Next session is the first Thursday of the month as usual, so May 7th, but before then come and join us for Loudhailer Seaside Special at Filey Folk Festival, May 2nd and 3rd. 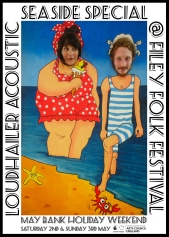 What a fantastic line up for our May bank holiday weekend special at Filey Masonic Hall. The venue is 27 Rutland Street, Filey, North Yorkshire, YO14 9JA – just down from The Belle Vue.

It would be great if you would bring your friends and family and hang out for the afternoon. There will be cabaret style tables. You can bring a picnic (but no need to bring alcohol, there is a bar there). It’s a family friendly venue and we’re really looking forward to it!

You can click to find out more about it here.