Rich and I are delighted to be working with a terrific group of partners on our new project – Open Bridges, exploring Hull’s unique river landscape and the culture which has grown up around it. You might have heard something about it…

For the first time in Hull’s history the city will be split in two when all Hull’s 13 bridges will be simultaneously raised or barriered, momentarily denying the freedom of movement east or west across the River Hull. On September 22nd Open Bridges will signify the vital role bridges play in our everyday lives with a river journey, the mustering of historic vessels representing three centuries and a new musique concrète commission by BAFTA winning Hull based composer John Stead.”

…but there’s a whole tapestry of threads to Open Bridges…

It all started when we were thinking about freedom – what it means to different people and the impact of freedom denied to so many people in the world today. We started to explore the concept that the only way to truly understand something is to experience it. We realised that Open Bridges would do something that is central to Hull’s unique culture as a city and would cause everybody in Hull to experience a freedom withheld – and returned.

Music is vital in our lives and we wanted to commission a piece of music to commemorate the occasion. We have known composer John Stead for a long time, but a chance meeting and effusive conversation in the supermarket led to us pooling our thoughts and we are thrilled that John has written a new music work for Open Bridges which will be premiered in octophonic sound on September 22nd at Hull’s Stage @ The Dock. It’s going to be amazing.

So here it is, Open Bridges:

The river journey and the bridges 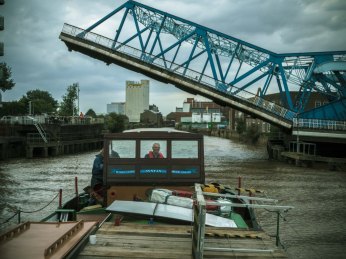 Syntan on teh river by Richard Duffy-Howard

The River Hull runs directly through the centre of the city defining East and West Hull and the culture of the city – fishing heritage west of the river and commerce in the east. The motor barge Syntan will travel down the River Hull passing through Hull’s 13 bridges. It will be met by Humber Keel Comrade and schooner HMS Pickle between North and Drypool Bridges for the final part of the journey out into the Humber. As the 3 vessels pass through Drypool, Scale Lane, Myton and Millennium Bridges at 20:17, the barriers on all of the bridges across the river will descend. 13 flares for 13 bridges will shoot into the sky as the 3 vessels are welcomed into the Humber Estuary by tugs from Svitzer (Maersk) and SMS Towage firing water cannon and searchlights. The city will then be reunited as all of the city’s bridges re-open to road traffic.

The river journey is to be documented by Humber Film and Octovision Media.

As the river journey ends the music begins

“Moments in Time for Open Bridges Hull – invites us in with familiar sounds, allowing us to hear everyday life and unfamiliar sounds of the bridge mechanisms and then shaping this into a piece that has momentum, a point of repose and reflection before taking us to a world of musical freedom where the sounds are transformed into a dream like musical landscape before returning us to the familiar, as the composer says ‘in a moment.’ Shaped sounds and intricate rhythms take the listener on an evocative journey building dynamically to the ‘revelation’ of the working sounds of the bridges and beyond.” Nigel Bartram Electro Acoustic Ensemble August 2017

Rich and John visited the bridges at Sutton Road, Stoneferry, Wilmington, Sculcoates, North and Drypool. While John recorded sounds of the bridge movements in action Rich had the chance to take photographs of the bridges rarely seen yet beautiful vistas and mechanisms.

While Rich was photographing the bridges I’ve been working with creative writers Christina Lewis and Russ Litten and we’ve started a programme of Open Bridges workshops in schools, prisons and community venues explore freedom and the impact of freedoms denied in the world today.

Hull – City of Culture 2017 – is united in a shared respect of Hull born politician and abolitionist William Wilberforce whose work to make slave trading illegal gave rise to Hull’s Freedom Festival and City of Culture Freedom Season. Freedom is a big part of the city but the only way to truly understand something is to experience it. Open Bridges means that everybody in Hull will experience a suspension of the freedom of movement – everyone will know about it and have to consider its impact on them.

We are delighted that every aspect of planning and delivery of Open Bridges is by people who are Hull based.